Gerald (Jerry) L. Barber
Inventor & Chairman of the Board

Gerald (Jerry) L. Barber is an alumnus of The Ohio State University with an undergraduate degree in physics, chemistry and comprehensive sciences. Mr. Barber began his professional career in Ohio teaching physics, chemistry, and biology at the high school level. His graduate studies were at Bowling Green State University studying secondary school administration and guidance counseling. At age 25 he became the youngest high school principal in Ohio.

Mr. Barber left the academic world to start, own, and operate the second largest amusement ride manufacturing company in the United States for eighteen years. During this time Mr. Barber invented over thirty-eight U.S. patents, twenty-two of which were produced commercially. In addition to amusement rides his patents cover a variety of fields from military to child safety. (Note: for patent searches, please search under, Gerald L. Barber and also Jerry L. Barber.) His most widely known patent the “Free Fall” amusement ride can be found in almost every amusement park and large carnival worldwide. Each park can theme their ride such as Disney’s Tower of Terror, Cedar Point’s Demon Drop, etc.  Mr. Barber co-designed, built and owned 1/3 interest in Adventure River Water Park in Memphis, Tennessee; later selling his interest in the business.

Mr. Barber co-invented with his son Todd, the “Reefball”, by far the most popular designer coral reef in the world http://reefball.org/. His son Todd founded the Reefball Foundation where Mr. Barber serves as a charter board member. The foundation was selected as a laureate for The Tech Awards. San Jose’s Tech Museum Tech Awards are sponsored by The World Bank, the U.N., Microsoft and Intel and are received annually by twenty-five companies globally. The award is presented to the very best of the best that have created “technology benefiting humanity.” The Reefball Foundation was also the 2012 recipient of the Environmental Protection Classy Award, the largest philanthropic award in the U.S. Additionally, Mr. Barber started, owned, and operated a company specializing in financing equipment for amusement parks and carnivals. This company was operational for twenty-nine years in Greenville, South Carolina. For the last ten years in business, it was the largest finance company of its kind in the United States and Canada. Mr. Barber started, owned and operated a company to provide ride design and ride parts for the industry.  Also, when the internet was just getting started Mr. Barber started a website, that since its inception, has been the largest site globally for selling and purchasing used amusement equipment. http://usedrides.com.

In 2006 Mr. Barber patented a new concept to impact the development and lessen the severity of hurricanes. He named his device the TUBE; “Thermal Underwater Bouncy Exchange”.

In 2008 Mr. Barber received a patent on his, “Life Saving Collar”. Working with a firm in Asheville, North Carolina, the first trial prototypes are completed and Mr. Barber is currently in the planning stages of bringing this exciting product to market.  In 2010 Mr. Barber had an additional patent issued on the Life Collar detailing the gas production and delivery method of the device.

In 2010 Mr. Barber was awarded the InnoVision Dr. Charles Townes Individual Achievement Award honoring his lifetime achievement in innovation, science and technology. This award is granted to one person each year in the Southeastern portion of the U.S. to the individual who has achieved the highest level of scientific innovation.

To date, Jerry Barber has over 60 U.S. patents.

He has been a member of the Society of International Business Fellows since 1991 and served as the South Carolina state chairman for the organization for four years. He was awarded SIBF’s first Allan J. McDonald International Entrepreneur Award for excellence in global entrepreneurship. (SIBF is a distinguished organization of 1,400 C-level executives and senior leaders who are active in international business)

Mr. Barber is a past president of the Amusement Industry Manufacturers and Suppliers International Association. For ten years he ran the international amusement ride week-long safety school which included 70 to 80 instructors and several hundred attendees.

In 2015 Mr. Barber was inducted into the Outdoor Amusement Business Association Hall of Fame for industry innovations and contributions to the growth of the outdoor, mobile amusement industry. OABA is the largest outdoor business association in the country.

Together with his wife Tammy, he has six children and eight grandchildren.

The Society of International Business Fellows (Class of 1991) 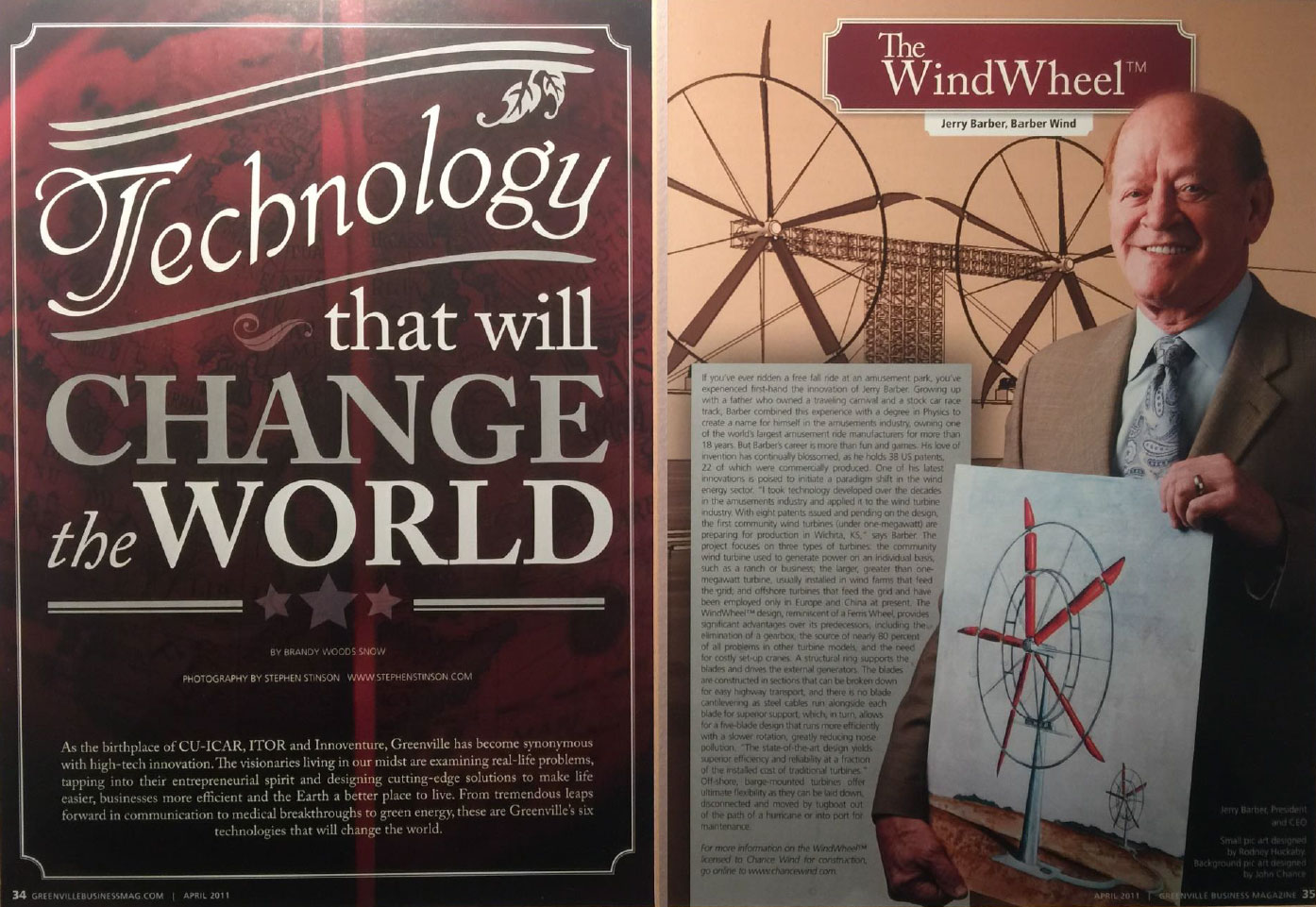